The World Health Organization’s theme for World Malaria Day 2019 is “zero malaria starts with me,” promoting efforts to keep malaria as a political priority, mobilize additional resources, and empower community ownership of the problem. The WHO released data points in conjunction with the 2019 campaign, asserting that great strides were observed post-2000 in reducing malaria incidence and mortality.

However, this declaration of achievement was countered by new and concerning data: Starting in 2015, a stubborn trend indicates that malaria progress has leveled off, and in some countries the cases of malaria have risen.

This ambitious goal of eradicating and treating malaria requires careful consideration of the required funding targets. Unfortunately, there are concerning trends here too: targets remain off track for funding goals, and current funding from the US government, the largest funder of malaria control efforts globally, is less than half of the suggested 2020 target of $6.6 billion.

A recent summary of US investments in malaria control identified top funding priorities for 24 Sub-Sahara Africa and three  Southeast Asian countries, including preventive measures such as bed nets and insecticide programs, monitoring and surveillance, and diagnostic as well as treatment strategies.  With funding stagnating and progress against malaria lagging, it is more important than ever to use cost-effectiveness analysis and other prioritization tools to yield the maximum health gains possible for every dollar invested.

Using the Tufts CEVR Global Health Cost-Effectiveness Analysis (GH CEA) Registry, we examined the cost-per Disability Adjusted Life Year (DALY) averted data that was relevant to key focus countries for US investments. Of the 27 focus countries, the GH CEA Registry presents data for 26 of them. Sub-Sahara Africa continues to be the largest funding focal point for US initiatives, for many reasons -- poverty, weak infrastructure, climate change, conflict, and limited disease surveillance.

Below is a sample table of cost-saving interventions (“win-win” interventions that cost less and yield more health than alternative approaches) from several countries one investment vehicle, the President’s Malaria Initiative, operates within Sub-Sahara Africa. 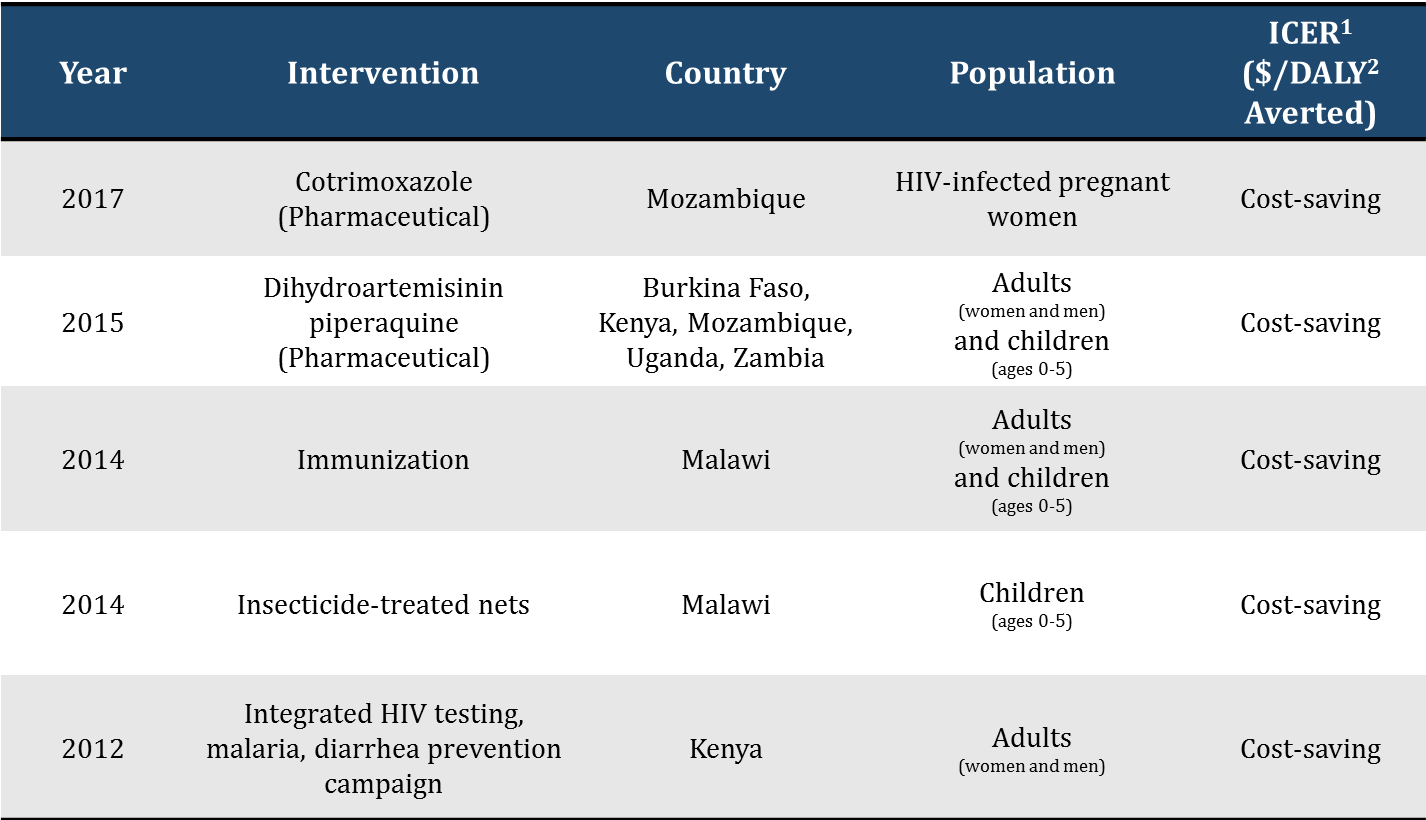 Interestingly, even in the face of complex socio-cultural, political, and infrastructural challenges in Sub-Sahara Africa, evidence shows that an integrated, coordinated approach can be beneficial for both malaria control and comorbid conditions. Combinations of pharmaceutical treatment of malaria, bed nets, and management of comorbid malnutrition, HIV or diarrhea have shown to be cost-saving in Kenya. Not included in this sample table, but included in the GH CEA Registry, are cost-effective (i.e., less than 1xGDP per capita) integrated programs observed in other settings such as Malawi, Tanzania and Mozambique.

While immunization against malaria is not yet a key focus area for priority setting in the President’s Malaria Initiative, there is evidence that malaria immunization is cost-saving in Malawi, and cost-effective in other Sub-Sahara Africa settings as shown in the above table.  This should be an area of continued interest, as widespread testing begins of one of the most promising malaria vaccines developed to date.

The scaling up or introduction of cost-saving and cost-effective strategies, such as integrated prevention programs and immunization, are both concrete ways for the US government and the President’s Malaria Initiative to inform investment priorities. This will help to make better use of the limited funds available, and ultimately, cost-effectiveness evidence generated on the ground in the areas served.

Prioritizing Interventions to Address Threats to Global Health: It’s (in Part, At Least) About the Economics