In 2017, deaths due to tuberculosis (TB) accounted for approximately 2% of deaths worldwide, totaling nearly 1.2 million. Even in the face of threats like multi-drug resistant TB, deaths attributable to this disease have declined by 25% since the start of the 21st century. The success of TB control efforts isdue largely to concerted commitment from governments, NGOs, and healthcare providers - a commitment that requires substantial investment. The World Health Organization (WHO) estimates that, in low- and middle-income countries alone, “$8 billion per year is required for a full response to the TB epidemic.”

But TB does not exist in a vacuum. Ministries of health have to juggle competing priorities when deciding what health programs to invest in. The benefits of TB control must be weighed against competing threats like HIV or non-communicable disease. Policymakers must determine which diseases impact population health most, what health programs work best, and, with budget in mind, which interventions are most cost-effective.

Making these trade-off decisions across disease areas requires a common metric of disease burden. In global health, we use the disability-adjusted life year (DALY), a standard metric that combines both morbidity and mortality measurements. DALYs can be compared across disease areas, allowing policymakers to directly compare the disease burden of TB compared to heart disease in respective contexts. Calculating a DALY involves adding up years in terms of a person’s early death due to a disease (Years of Life Lost) and computing their diminished quality of life using a disability weight (Years Lived in Disease). More information on how DALYs can be found in the figure below, or at this link.

Although DALYs solve the comparability problem, only a small percentage of economic evaluations use DALYs to measure outcomes. Most studies look at outcomes in terms of natural units, like prevented cases or deaths averted, which cannot be directly compared across disease areas. This inspired CEVR’s global health team to create the DALY calculator. The calculator is a free online tool that allows users to convert natural units into DALYs on an individual or population scale. The tool only requires a few inputs, and the required information is readily available from organizations like the WHO or the Centers for Disease Control and Prevention (CDC). For modelers, we also provide the source code so users can embed the conversion equations within their own models. 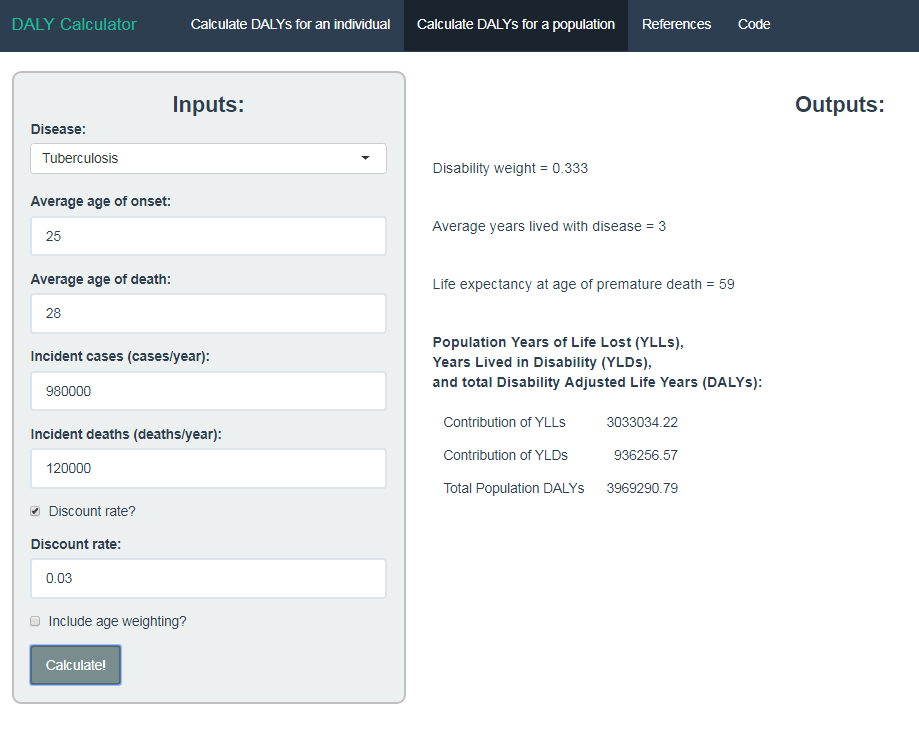 To demonstrate the usability of our tool, we searched the CEVR Global Health Cost-Effectiveness Registry and found an article by Verguet, Laxminarayan, and Jamison that analyzes the cost-effectiveness of universal coverage of TB treatment in India based on TB deaths averted. However, this does not take into account the quality of life impact on those living with TB, nor is it comparable to other interventions using a common health outcome. Using the DALY calculator, we converted this outcome to DALYs, supplemented by epidemiology data from the WHO. We found that their proposed public funding program would avert nearly 4 million DALYs in India, a number that could be used by policy makers to directly compare this intervention’s impact to other programs for other conditions.

By using tools like the DALY calculator to create comparable research findings, we can aid policymakers and researchers alike in making effective prioritization decisions, with the ultimate goal of funding the most efficient TB control programs and ultimately curbing the threat of TB worldwide.

Prioritizing Interventions to Address Threats to Global Health: It’s (in Part, At Least) About the Economics