Cancer is the second leading cause of death worldwide, with over 17 million new cancer cases in 2018 (source: International Agency for Research on Cancer [IARC)]). This family of diseases also imposes a large economic burden. Globally, the total cost of managing cancer was estimated to be approximately US$1.2 trillion in 2010 (source: WHO).

Despite the challenges that cancer presents, many milestones have been achieved over the years in prevention, control, and treatment of cancer, such as establishing and expanding population-based cancer screening programs, developing novel anticancer medications, and strengthening the collaborations between regions and countries to support cancer care and communities. Specifically in the United States, the Food and Drug Administration has approved hundreds of anticancer drugs, devices, and diagnostic tests. On the global level, the World Health Organization (WHO) and other collaborative groups (including the Union for International Cancer Control [UICC]) have worked together to promote unity around this disease area and garner global support for its affected populations. One such event held to promote the platform and global dialogue is World Cancer Day, which is on February 4th.

In addition to the high price tag to prevent, treat, and manage cancer, the effectiveness of anticancer interventions varies across cancer types and populations. While newer and targeted therapies allow for increased survival and long-term management of many cancers, few truly “curative” therapies are available. With these points as a present reality, the importance for healthcare decision-makers of supporting strategies that are “cost-effective” in combating cancer is paramount.

So, what are the most “cost-effective” strategies to combat cancer?

Both the Cost-effectiveness Analysis (CEA) registry and Global Health (GH CEA) registry provide information from cost-effectiveness analysis (CEA) studies that may help in developing and prioritizing cancer prevention and treatment programs. According to the GH CEA registry, less than 5% of cost-per-Disability Adjusted Life Year (DALY) studies focused on cancer, which is much lower than the amount of cost-per-QALY studies from the CEA Registry (reports outcomes by cost-per-Quality Adjusted Life Year [QALY] gained). 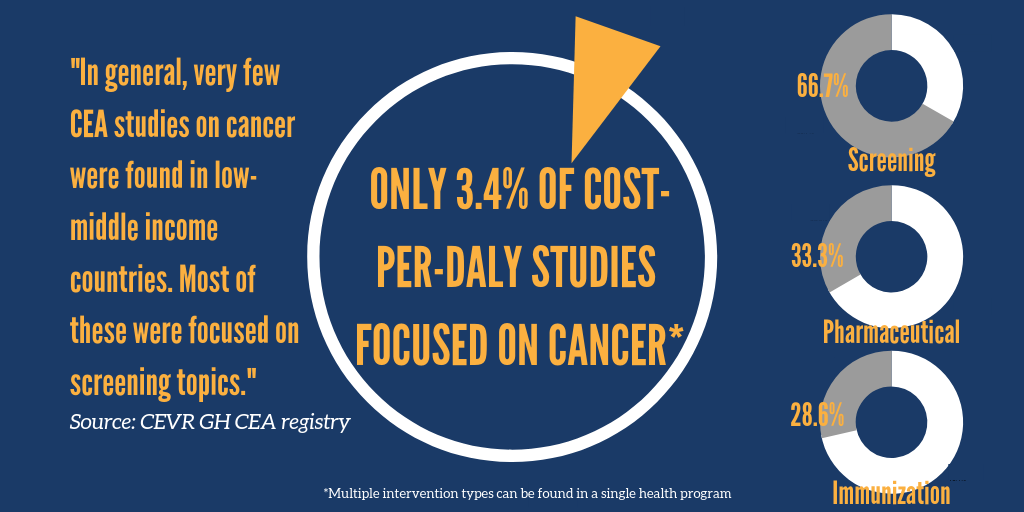 In general, very few CEA studies (18 articles in the GH CEA registry) were conducted in low-middle income countries (LMICs). For example, Kim et al (2013) evaluated the cost-effectiveness of human papillomavirus (HPV) vaccination in 20 countries in the Extended Middle East and North Africa region and found that HPV vaccination was highly cost-effective in most of these countries at low costs using a threshold of one time gross domestic product per capita of each country (a commonly used metric for CEA). Another recent study in Iran (Zehtab et al (2016)) found a screening program for breast cancer to be cost-effective relative to no screening; however, the authors stated that a potential for low participation rates could be a barrier to a successfully utilized screening program. The low participation rates might be due to the lack of awareness of cancer prevention. Raising awareness of cancer and encouraging prevention is also the purpose of World Cancer Day. The 2019 World Cancer Day theme was “I Am and I Will” (#IAmAndWill). This is an empowering theme to urge for action and personal commitment in combating cancer, which also encourages the participation of breast cancer screening and HPV vaccination.

Indeed, successful implementation of cancer control plans on a national level remains rare in LMICs, though the heavy burden of cancer in these regions continues to grow (Selmouni et al (2018); Torre et al (2016)) This may also be related to variable capacity for cancer care (e.g., affordability of specific drugs/therapy) in each LMIC. On the other hand, many argue that cancer care can potentially be expanded in LMICs, supported by feasibility and cost-effectiveness data (Horton & Gauvreau, (2015)). The CEA data related to cancer care that exists within both the Tufts CEA and GH CEA Registries can better assist future planning on cancer care investment and scale-up activities in LMICs.