By Lauren Do, BS, Research Assistant

Mental health has been at the forefront of public discussion the past decade, prompting numerous observance holidays throughout the world. In fact, this January is National Mental Wellness Month. Besides raising awareness, these “holidays” are meant to empower communities to take action and create lasting change.

It’s easy to see why mental health is important. One in four people globally will suffer from a mental or neurological disorder at some point in their life. Nearly two-thirds of known cases never seek professional help. As one of the key consequences of this gap, someone loses their life to suicide every 40 seconds.

Beyond lost lives and emotional trauma for loved ones left in the wake, suicides and suicide attempts have major economic implications. In the US alone, the average cost of one suicidal act in 2013 was over $1.3 million, resulting in a combined total annual cost of over $93 billion. Of these costs attributed to suicide, only a small fraction were borne by the health system; 97% were associated with lost work or school productivity alone.

The issue of suicide isn’t unique to high income countries. The World Health Organization estimated that 79% of suicides globally occurred in low and middle income countries (LMICs) in 2016. Behind traffic accidents, it’s the second leading cause of death for young people age 15-29 worldwide. Given these global statistics, the need for suicide prevention is paramount. The reality is that mental healthcare services are routinely under-funded in LMICs. Annual spending on mental health amounts to less than $2 (USD) per person, and as low as $0.25 in low income countries. It’s no surprise that 76%-85% of people in LMICs with severe mental disorders don’t receive any treatment.

How can we convince policymakers that mental health services are worth the investment? One answer is cost-effectiveness analyses (CEA). Are the costs aligned with the benefits and how do they prioritize given a limited budget? CEA evidence provides a powerful tool kit that can help policymakers effectively allocate finite resources. Using CEVR’s own Global Health (GH CEA) Registry and CEA Registry databases, we reviewed the incremental cost-effectiveness ratios (ICERs) related to suicide prevention.

One issue to note is the lack of studies directly related to suicide in either registry. We broadened our search to include articles that directly studied suicide prevention, or interventions related to mental health disorders commonly linked to suicidal acts (e.g., major depressive disorder, bipolar disorder, schizophrenia). Interventions ranged from pharmaceutical management or cognitive behavior therapy for patients already diagnosed with a mental disorder, to routine suicide screenings, peer outreach programs and suicide helplines.

The economic case for prioritizing suicide prevention is compelling. Of the 198 relevant ratios catalogued within the GH CEA Registry, 98% would be considered of “good value”; 13% had results that were in the range of 1-3 times GDP per capita in the country of interest (a common threshold for a reasonable investment); 84% had findings that were less than one times GDP per capita, and a few were even “cost-saving” (they improved health and lowered costs). Drugs, individual counseling, and bibliotherapy were common cost-effective interventions. Cost-saving programs included suicide screening and group counseling. Additionally, data from the CEA Registry revealed that high income countries can reap even greater benefits. Of the 26 ratios directly related to suicide prevention in high income countries, over 60% were deemed cost-saving (e.g., pharmaceutical management, crisis helplines) and near a quarter were cost-effective (e.g., pharmaceutical management, outreach programs, individual counseling). 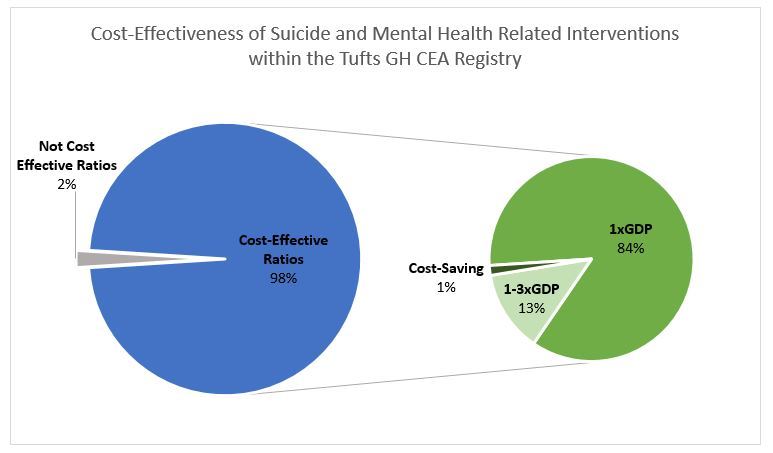 Although the current evidence is compelling, more data surrounding suicide is needed. Within the GH CEA Registry, the 198 ratios included in our analysis stemmed from only 7 unique studies, highlighting an overall lack of research on suicide prevention, a concern cited by the WHO. This lack of available, high-quality data may be related to the widespread stigma against suicide and seeking help for suicidal thoughts/behaviors.

Leaving limited research and stigma aside, the evidence we do have tells us one important thing—suicide prevention is worth turning our attention to. Investing in cost-effective interventions takes us even closer to making mental health care a global reality.

The drug industry may be missing an opportunity to influence ICER