Most of the media’s attention is on the impact of mental health disorders in high-income settings, but the reality is that this is a global concern.  A significant proportion of the global burden of disease can be attributed to mental health disorders, specifically to neuropsychiatric disorders (e.g., major depression, addiction, ADHD), generating over 160 million person-years of disability worldwide.  The gap in access to mental health treatment is particularly pronounced in low- and middle-income countries, where between 76% and 85% of people suffering from severe mental disorders receive no treatment whatsoever.  In 2013, the World Health Organization (WHO) released a Mental Health Action Plan to help recognize the essential role of mental health in overall wellbeing and to promote equity through universal health coverage (UHC).  Since the release of WHO’s action plan, several countries, including India and Ethiopia, have taken essential steps to provide access to mental health services through UHC.  China and Brazil have also embarked on efforts to integrate mental health coverage for citizens with schizophrenia.

However, ignoring the potential benefits of providing access to mental health treatment can generate other costs. For example, a 2004 survey in India found that out of pocket expenditures for treatment of psychiatric disorders amounted to almost $280 million.  Families who must pay out of pocket for these services may be covering those costs by cutting other types of spending and investments.  In addition, it is widely known that mental health disorders, particularly major depressive disorder, can exacerbate the trajectory of other medical conditions and significantly impact productivity in the household and in the workplace.  When left untreated, this condition has the potential to lead to increased absences from work and decreased work performance when at work. 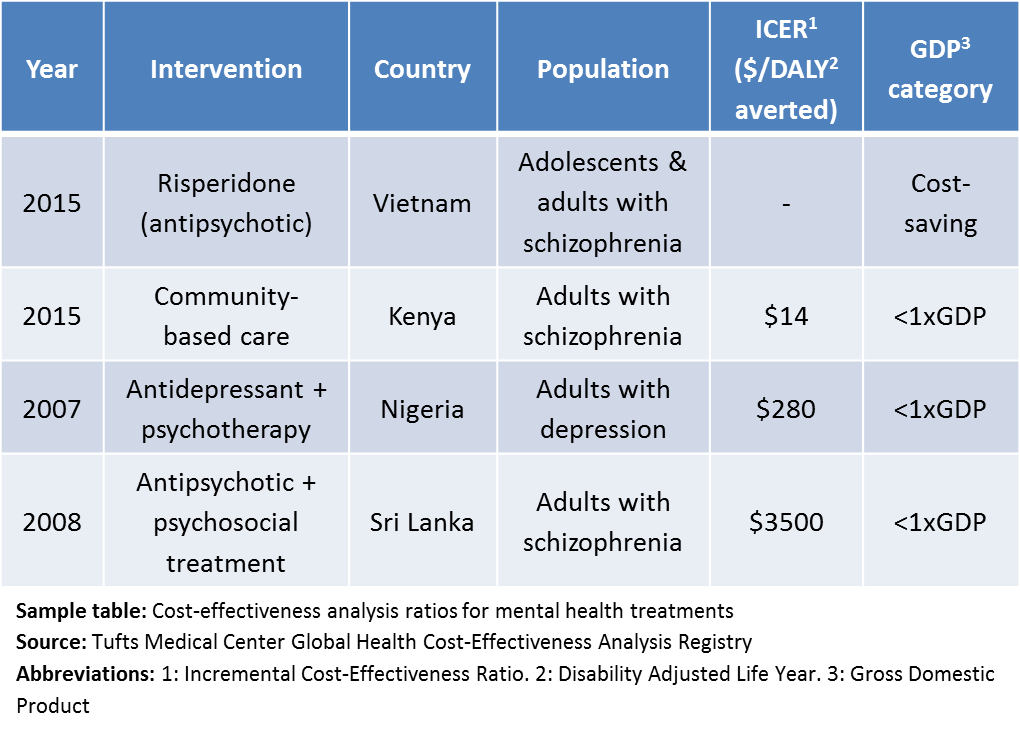 Although there may be additional resource barriers to providing affordable access to mental health services in low and middle income countries, evidence from our Registry suggests that there are some approaches to treat mental health disorders that represent good “value for money” in these settings.   Policymakers should take note—whatever their method for prioritization of UHC services, mental health interventions deserve their consideration.

Will ICER’s Response to Attacks on the QALY Quiet the Critics?