How might US health plans cover AMX0035 (Relvyrio™) for ALS? Lessons from the SPEC Database

By Molly Beinfeld and James Chambers

In what is a significant milestone for amyotrophic lateral sclerosis (ALS) patients, the US Food and Drug Administration (FDA) approved AMX0035 (Relvyrio™) on September 29, 2022. In March 2022, the Peripheral and Central Nervous System (PCNS) Drugs Advisory Committee voted 6-4 against the drug based on phase 2 data, stating concerns about the robustness of the evidence of effectiveness. Following the meeting, Amylyx Pharma submitted additional analyses from the pivotal trial as well as biomarker data from a study in patients with Alzheimer’s disease, which formed the basis of the approval.1 Given the evolving evidence on AMX0035 and high costs of the drug, the question remains: how will commercial health plan coverage facilitate patient access?

ALS is a rapidly progressive and fatal neuromuscular disease. Patients with ALS progress from muscle weakness to respiratory failure and death within an average of 3-5 years and affects approximately 29,000 adults in the United States.2

There is no cure for ALS. The goal of treatment is to slow progression and manage symptoms. Prior to AMX0035, the only FDA-approved therapies were riluzole (various formulations, including generic) and edaravone (Radicava™).

Coverage polices reflect a complex set of inputs and health plans serve different populations. Plans and drug manufacturers rarely disclose pricing or rebate agreements, which undoubtedly influence coverage policy formulation. Still, we can gain insight into how health plans may cover AMX0035 by examining: 1) how they have covered edaravone and 2) Institute for Clinical and Economic Review (ICER) policy recommendations from their recent review of ALS treatments.  We focus on two utilization management tools and identify measures that may limit access to the drug by patients indicated for treatment by the FDA:

Our data come from the Tufts-CEVR Specialty Drug Evidence and Coverage (SPEC) Database, which contains detailed information on how 18 of the largest US commercial health plans cover specialty drugs and products.

As of April, 2022, coverage policies were available for 17 commercial health plans for edaravone in SPEC. All 17 plans imposed restrictions in their coverage policies that limit access to edaravone beyond the FDA indication.  Twelve plans required patients to have a diagnosis of definite or probable ALS per the El Escorial/revised Airlie House or Awaji-Shima criteria. Furthermore, fifteen plans required patients to have a score of 2 or more on all 12 areas of the ALS Functional Rating Scale-Revised (ALSFRS-R), which excludes ALS patients with the most severe form (requiring tube feeding or mechanical respiratory support).3

Fifteen plans required a disease onset of less than two years and a minimum respiratory function of greater than 80% forced vital capacity (FVC) or continuous use of respiratory support is not required. These clinical requirements are consistent with the inclusion criteria for the product’s phase III trial (MCI-186) (NCT00330681), but are not included in the FDA label indication.

Six plans’ policies explicitly mention the requirement to provide medical record documentation, including clinical notes, charts, imaging and diagnostic test, etc., in order to meet the complex and detailed subgroup restrictions mentioned above. This is likely an underestimate of the burden of documentation requirements, as additional details are included in prior authorization forms that we did not account for here.

What are the implications for AMX0035?

Plans have imposed onerous coverage restrictions on edaravone, likely because of the treatment’s high price, uncertain benefits and unfavorable cost-effectiveness. Patients will likely face similar challenges in accessing AMX0035 due to its uncertain value.

As is the case of edaravone, we expect at least some plans’ AMX0035 coverage policies to impose clinical criteria that correspond to AMX0035’ registration trial’s eligibility criteria. That is, plans may require patients to have been diagnosed with ALS using the El Escorial criteria within 2 years and have a baseline minimum respiratory function and ALSFRS-R scores that restrict access to the less severe patient population.

Finally, it is likely that coverage requirements for AMX0035 will vary across plans, just as they do for edaravone. Those differences can be problematic for patients’ access, as it means drug coverage depends on which health insurance plan they happen to belong to.

Key Policy Recommendations from ICER’s Review of Edaravone and AMX0035

In its recent assessment of ALS treatments, the Institute for Clinical and Economic Review (ICER) reported that the evidence to support AMX0035 was sufficient, however it was not sufficient for edaravone except in the narrow patient population consistent with the pivotal trial. ICER also concluded that the evidence was insufficient to compare the two treatments. Further, ICER estimated that edaravone’s price would need to decline by as much as 98 percent in order to represent acceptable value.4

In its policy recommendations, ICER acknowledges that there is considerable disagreement about using clinical trial eligibility criteria to restrict access to AMX0035 and suggests that it would be reasonable to “consider coverage for all patients with ALS per the determination of a board-certified neurologist.” In addition, ICER indicates that there is “no clinical rationale to justify require step therapy through riluzole and/or edaravone before gaining coverage for AMX0035.4”

More on the Specialty Drug Evidence and Coverage (SPEC) Database

Access to SPEC is through the CEVR Sponsorship program. Access to the online search portal of the SPEC database is also available for individuals from academic organizations for non-commercial use of the data. Contact James Chambers (jchambers@tuftsmedicalcenter.org) for more information. 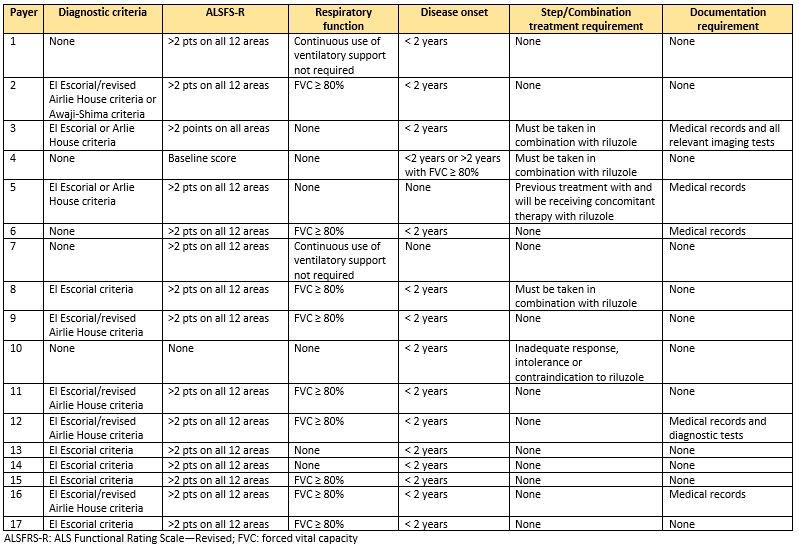 Use of “Novel” Elements of Value in Cost-Effectiveness Analyses
Read Article
On my mind with Josh Cohen, PhD
Read Article
Join our team: CEVR is Hiring a Faculty Researcher!
Read Article
View All Articles